Bay Line provides Rhode Islanders with a central telephone number to leave a recorded message about any sign of Bay-related environmental problems throughout the summer season for appropriate follow-up. Its aim is rapid, effective response to environmental incidents on Narragansett Bay. 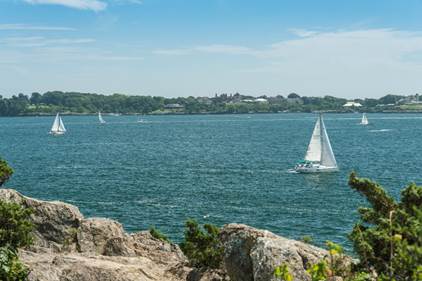 Reports of Bay water quality conditions are updated weekly and available at dem.ri.gov. The information is compiled from data provided by a network of monitoring stations in the Bay that monitor oxygen, temperature, salinity, pH levels, and, in some cases, water clarity and the presence of algae blooms. The Department, in cooperation with the University of Rhode Island, has completed the seasonal deployment of monitoring instruments and posts water quality reports on a weekly basis.

The intent of Bay Line is to provide an effective means for exchanging Bay-related information between the public and the agencies charged with monitoring and protecting the Bay. For instance, the line can be used to provide DEM with early warnings about emerging issues, such as algae blooms, that might serve as precursors to low oxygen events and fish kills.

Bay Line is an integral part of a series of initiatives undertaken by DEM to protect Narragansett Bay. A related initiative is the Bay Assessment and Response Team (BART), which is designed to facilitate timely and well-coordinated responses to any major Bay-related environmental emergency. BART includes professional staff from DEM, the Rhode Island Department of Health, and the University of Rhode Island.

Rhode Islanders can find a great deal of Bay-related information, provided by the BART program on DEM’s website, www.dem.ri.gov. The weekly Bay Line reports can also be found at that location.