Personal protection is the first line of defense against mosquitoes that may carry WNV, EEE, or other diseases – and the most effective way to avoid infection. With WNV and EEE established throughout the state, DEM and RIDOH remind the public to eliminate mosquito breeding grounds and prevent being bitten, whenever possible. While outdoor spaces reduce the likelihood of exposure to COVID-19, they pose a greater risk of exposure to mosquito-borne diseases. For this reason, DEM and RIDOH emphasize that if Rhode Islanders are going to be outside during the peak “biting hours” – at dawn and dusk – to wear your face masks, long sleeves and pants, and use insect repellent. The following precautions are advised.

Get rid of mosquito breeding grounds

Horses are particularly susceptible to WNV and EEE. Horse owners are advised to vaccinate their animals early in the season and practice the following:

Mosquitoes are trapped weekly by DEM and tested at the RIDOH State Health Laboratories. DEM issues advisories on test results from July through September, with additional reports as necessary. Test results are pending for traps set on September 8  and will be included in future announcements.  Typically, positive test results trigger additional trapping to assess risk. 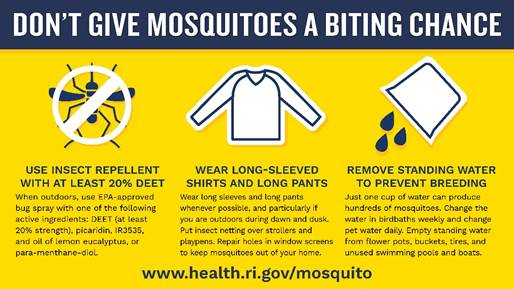