STATE HOUSE – As the state reels from a surge in gun violence that included a mass shooting that injured nine in Providence last week, a large group of legislators in both chambers of the General Assembly are advocating for increased funding for the Nonviolence Institute in Providence.

Spearheaded by Providence legislators Rep. José F. Batista and Sen. Tiara Mack, whose districts include the institute’s South Providence headquarters, the group is seeking to boost the institute’s state funding from $200,000 to $1 million in the coming 2022 fiscal year.

“The mass shooting that took place in the working-class neighborhood of Washington Park on Thursday May 13, 2021 – and the multiple shootings that have taken place since – revealed the dire need for greater violence prevention and violence intervention in our state,” they wrote.

The institute has been successful in diffusing simmering street conflicts and convincing youth to embrace nonviolence. While the institute once employed 15 outreach workers, some of whom had previously been associated with gangs themselves and who could connect with at-risk youth, it is now down to five. Years of reduced funding have left the institute with a shoestring budget with periods of time where outreach workers went through layoffs or were forced to work part-time.

“The Institute’s amazing work, however, cannot be fully realized without additional funding to increase nonviolence training, increase the number of outreach workers and increase organizational capacity for victims’ services. As Sister Ann Keefe was fond of saying, ‘I don’t need a think tank, I want a DO tank.’ And, that’s exactly what the Institute is,” the letter said.

Senator Mack and Representative Batista said that they are pushing the effort because they witness the need for the institute’s help on a daily basis in their own neighborhoods, as well as beyond.

“While I am proud of the work we have done in the General Assembly so far this session, the recent and tragic shootings help underscore all the work that we still need to do,” said Representative Batista (D-Dist. 12, Providence), who lives a few streets away from the Carolina Avenue mass shooting. “For me in particular, recent events have helped me refocus my efforts toward the needs and experiences that are specific to the South Providence and Washington Park communities. My belief is this investment in the Nonviolence Institute will help our young people find alternatives to violence so that they may live long, healthy, productive lives and develop to their full potential.”

Said Senator Mack (D-Dist. 6, Providence), “The Nonviolence Institute has been doing the groundwork that works to get people out of organized crime and working toward a better future. The violence we are experiencing shows us just how much we need to invest in this community and grassroots work. What we are calling for is a smart investment in addressing violence right now, and making Providence and Rhode Island a safer place for everyone in our communities. It’s really an investment in people, because it will help turn around lives and let those who are just trying to go about their lives in their neighborhoods do so without fear.” 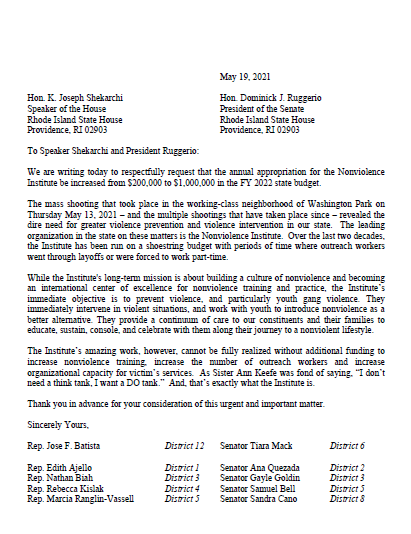 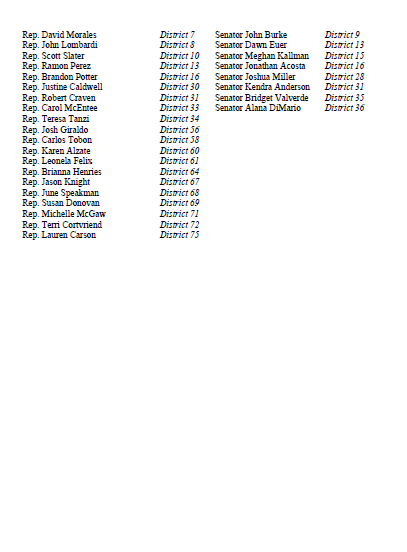