DEM URGES RHODE ISLANDERS NOT TO

REMOVE FAWNS AND OTHER BABY ANIMALS

PROVIDENCE – The Rhode Island Department of Environmental Management (DEM) is cautioning the public not to assume that finding a baby animal means it needs to be rescued. For example, a fawn lying on the ground hidden in grass or brush should not be considered abandoned; it should be left alone. 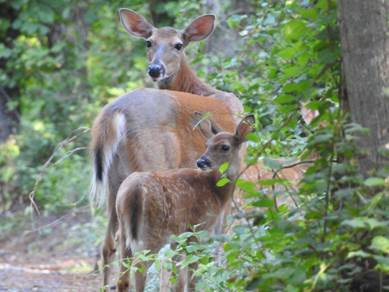 White-tailed deer give birth to fawns in May and June. Each year, DEM receives many calls about fawns apparently being abandoned by their mother.

"This is almost never the case and most of these fawns are not abandoned," said Dylan Ferreira, a wildlife biologist in DEM's Division of Fish & Wildlife. "In nature, the mother deer gives birth and for the next five to seven days, the fawn is incapable of following the mother, so it is natural for the fawn to lie in a curled 'freeze' position on the ground hidden in grass or sparse brush. Sometimes, however, well-intentioned people will assume the fawn is abandoned and take it home to 'save' it from predators or domestic animals."

These fawns, however, have not been abandoned. "In fact, the doe will often be nearby, out of sight and will only come to the fawn a few times during the day or after dark to feed the fawn," Ferreira added. "If you see a fawn in this condition, please leave it alone, as the mother will return to feed it."

After seven to 10 days, the fawn may run when approached and after a month will be able to follow and feed alongside the mother. Interference by handling and taking fawns from the wild by people during this process can often doom young deer. If there is no dead doe found nearby or on the road, the fawn is not considered abandoned. Telephone 401.222.4700 | www.dem.ri.gov | Rhode Island Relay 711

If you should find a fawn, the best thing to do is immediately leave the area and avoid creating any disturbance near it. Fawns should not be handled – and counter-intuitive as it may seem – do not need your help. Fawns are well camouflaged and have very little scent helping to protect it from predators, explains Ferreira.

Fawns also lie motionless when approached by a predator, a behavioral adaptation to help it survive. The doe-fawn bond is very strong and even in extreme cases if the fawn has been handled, it should be put back near the location where it was found or next to natural vegetation to provide some protection.

Rarely, a fawn may approach people or pets. If this occurs, it should be gently coaxed back down into the grass by pressing down on its shoulders as its mother would. Then, DEM advises the public to immediately leave the area. Do not wait to see if the doe returns as she will avoid the area until the disturbance passes. She will return to search and care for the missing fawn once the area is clear of people and pets.

Fawns cannot be kept as pets and removing a deer from the wild and keeping it in captivity – however well-intentioned – is illegal in Rhode Island. Wild deer often do poorly in captivity, suffering malnutrition and behavioral changes as they become accustomed to humans. Captive deer also can pose health risks or may become dangerous to people or domestic animals as they mature. Tame deer raised in captivity have trouble returning to the wild as a free-roaming creature as nature intended. Any fawn obviously injured by a pet, vehicle, or farm equipment should be reported directly to the Division of Fish and Wildlife at 401-789-0281.

For more information on when it is appropriate to assist young wildlife, check out DEM's YouTube channel for a recording of the Division of Fish and Wildlife's recent outreach program here: