PROVIDENCE – The Rhode Island Department of Environmental Management (DEM) is asking the public to report sightings of wild turkey hens – both with a brood of baby turkeys and without – and tom turkeys to help with research efforts. Information gathered from the public is helpful in determining the number of young birds that survive after common causes of mortality such as predators, weather, and roadkill are considered. 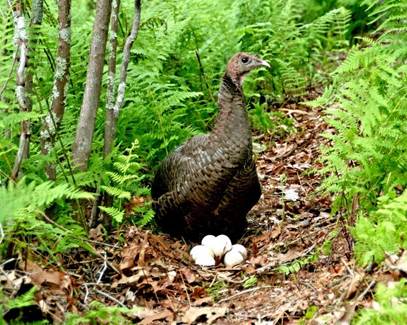 To align DEM’s survey methods with those developed by the National Wild Turkey Federation, the survey has been modified from previous years. The survey window runs now through August 31 and includes observations of tom turkeys to get an idea of the male to female ratio in Rhode Island’s turkey population. This survey traditionally provides the division with hundreds of brood reports annually and could not be completed without the help of citizen scientists.

To participate in this year’s survey, the public can submit their reports via Survey 123, an online survey platform. This platform allows the public to download the Survey123 app on their smartphones and record observations on the go, or it can be filled out on a computer. If residents do not have access to a computer or smartphone, observations can be recorded on a datasheet provided by DEM Fish and Wildlife. We ask that participants using the datasheet return them to DEM’s Division of Fish and Wildlife at 277 Great Neck Road, West Kingston, RI 02892 by September 15.

To report observations via Survey 123 please use the following link on your smartphone (you will need to download the survey123 app prior to opening the link) or computer https://arcg.is/0r48a50.

For more information on the Wild Turkey Brood Survey, as well as an observation guide and the datasheet , visit www.dem.ri.gov/wildturkey.