PROVIDENCE – The Rhode Island Department of Environmental Management (DEM) today announced that all 140 mosquito samples from 46 traps set statewide on July 13 and July 19 have tested negative by the Rhode Island Department of Health (RIDOH) for both West Nile Virus (WNV) and Eastern Equine Encephalitis (EEE).  Also, 43 mosquito samples from traps set on June 20 have tested negative for EEE and WNV. 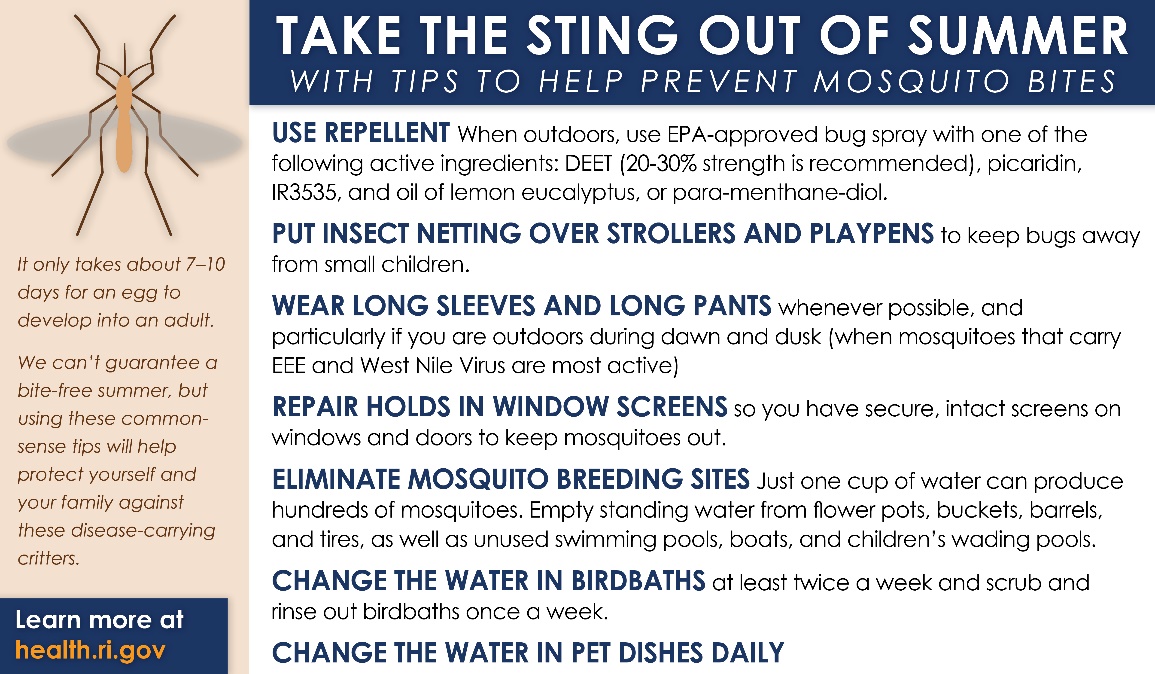 To date, in Rhode Island, there have been no findings of EEE or WNV in mosquito samples.  Ten pools of mosquitoes trapped in Connecticut have tested positive for WNV, and 22 mosquito pools in Massachusetts have tested positive for WNV. These findings are not unexpected, as WNV has become established in North America following its introduction in 1999.  The positive findings in neighboring Connecticut and Massachusetts indicate that WNV is beginning seasonal activity in our area.  WNV will become more prevalent as the season progresses, so residents are advised to reduce their exposure to mosquitoes until the first hard frost. There have been no findings of EEE in mosquito pools in Connecticut or Massachusetts.

Personal protection is the first line of defense against mosquitoes that may carry WNV, EEE, or other diseases – and the most effective way to avoid infection. With WNV and EEE established throughout the state, residents are reminded to eliminate mosquito breeding grounds and prevent being bitten, whenever possible. The following precautions are advised.

Get rid of mosquito breeding grounds

Horses are particularly susceptible to WNV and EEE. Horse owners are advised to vaccinate their animals early in the season and practice the following:

Visit health.ri.gov/mosquito for additional mosquito prevention tips, videos, and local data. DEM and RIDOH also remind Rhode Islanders to take precautions to avoid mosquito bites when traveling to Zika-affected countries. Pregnant women and women who are considering becoming pregnant should not travel to countries with active transmission of Zika.

Mosquitoes are trapped weekly by DEM and tested at the RIDOH State Health Laboratories. DEM issues advisories on test results from July through September, with additional reports as necessary. Test results are pending for 11 traps set on June 20 and from traps set from July 22 to July 26; those test results will be included in future announcements. Typically, positive test results trigger additional trapping to assess risk.