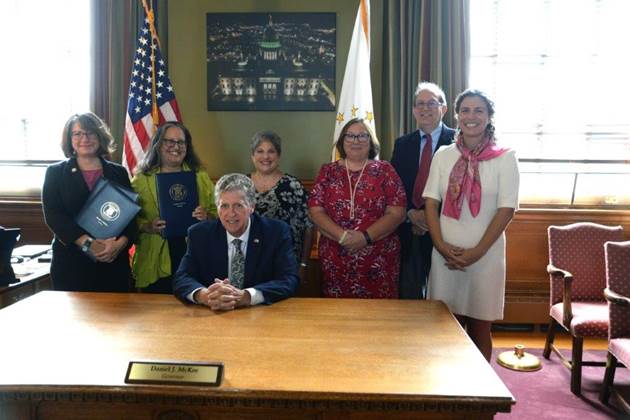 The legislation (2021-H 5650A, 2021-S 0840A), which passed the General Assembly July 1 and was ceremonially signed into law by Gov. Daniel McKee yesterday, formalizes a commission to implement a 2016 law introduced by Senator Goldin and House Majority Whip Katherine S. Kazarian to require public schools to teach students about genocide and the Holocaust.

“Given the hate and bigotry that is common in public discourse today, it is especially important to educate students about the incredible damage that prejudice and intolerance have caused throughout history. The best way to ensure our future generations never repeat these actions is to teach them about the impact the Holocaust and other genocides have had in our world. Learning about our past provides perspective on current world events. It is also an opportunity for people to learn from one another about experiences of oppression,” said Senator Goldin, whose grandparents fled eastern Europe to Canada during the pogroms. Those of her family members who were unable to escape died in either the pogroms or the Holocaust.

Said Representative Kislak (D-Dist. 4, Providence), “So many Rhode Islanders’ families are from communities that have been impacted by genocides. Listening to each other’s stories and learning about those diverse histories will help us see the humanity in one another and build stronger communities. This bill will establish a commission to provide support to our educators and raise awareness of genocides that have affected Rhode Islanders and have shaped our communities’ histories.”

“As hate crimes have been rising in our own country over the last few years, it’s particularly important that students are taught about the catastrophic atrocities that have been committed when the seeds of hate are planted,” said Representative Kazarian (D-Dist. 63, East Providence), who cosponsored this bill. All eight of her great-grandparents are survivors of the Armenian genocide. “My family’s own history involving the Armenian genocide has shown me that these events in history should never be forgotten. It is important that our children recognize and understand how such terrible events can occur in society, and more importantly, how to stop them from happening.”

“My relatives have a keen understanding of how hate and bigotry can escalate to reverberate through generations,” Senator Paolino said.  “It is important that we educate society on the warning signs of genocide. Learning the history about these atrocities and how to prevent them will best protect our future.”

“I have experienced the horrors of genocide firsthand. It’s a very tragic fact that genocide continues around the world today. Our students are citizens of the world, and need to understand the impacts of genocide on their brothers and sisters wherever it occurs,” said Representative Biah.