PLANTS AND TREES, DETECTED FOR FIRST TIME IN RHODE ISLAND

PROVIDENCE – The Department of Environmental Management (DEM) announces that the spotted lanternfly (SLF), an exotic pest that targets various plants and trees, has been detected for the first time in Rhode Island. Native to Asia, SLF is most commonly associated with “Tree of Heaven” (Ailanthus altissima) plants and also feeds on a wide variety of agricultural crops such as grape, apple and hops; and several native species of plants and trees including maple, walnut and willow. 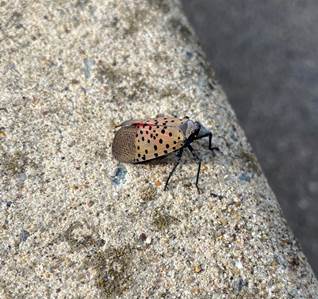 A single SLF was found in an industrial/commercial area in Warwick near Jefferson Blvd. and a photo of the insect was sent to DEM through its online agricultural pest alert system. DEM’s Division of Agriculture confirmed the sighting on August 2 and is asking the public to report any suspected sightings at www.dem.ri.gov/reportspottedlanternfly. No known population of SLF is currently present in this area. DEM will be conducting an extensive survey of the area based on US Department of Agriculture (USDA) recommendations to determine if there is any further presence of the invasive insect and will be providing outreach materials to businesses in the area.

“In Rhode Island, more than 800 acres of agricultural lands including vineyards, orchards and berry farms are at risk of being infested with SLF, so it’s critical that we take the necessary steps to detect and stop the spread of this invasive pest, particularly since it has now been found in our state,” said Cynthia Kwolek, senior environmental planner and RI CAPS state survey coordinator in DEM’s Division of Agriculture.

DEM, in partnership with the University of Rhode Island (URI) conducted a statewide survey in 2019 of local vineyards and areas with large populations of “Tree of Heaven” plants for SLF. Earlier this year and also in 2020, DEM and URI held a series of public workshops to help municipalities, the grower industry, and residents prepare for and respond to this invasive pest, should it be detected in the state.

In addition to its spotted patterning, the adult SLF’s unique colors feature scarlet underwings, yellow markings on the abdomen, and tan semi-transparent forewings. Adult lanternflies are about an inch long and are active from August until the first hard freeze, which typically occurs from late October into November. 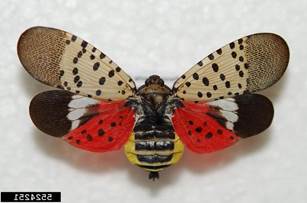 Although SLF can fly distances on its own, these pests are excellent hitch hikers and mainly spread through human movement. Their inconspicuous egg masses can be laid on pallets, vehicles and other goods, so it is important to inspect shipping materials and adhere to travel restrictions when moving through areas that are under quarantine for SLF.  The following tips can help stop the spread of SLF:

• If you visit states with SLF, check all your gear and equipment before leaving and scrape off any egg masses.

SLF was first detected in Pennsylvania in 2014 and has quickly spread through surrounding states. An invasive plant-hopper that is currently infesting portions of the mid-Atlantic region of the United States, SLF has established populations in Pennsylvania, New Jersey, Maryland, Delaware, and Virginia with individual finds in New York, Connecticut and Massachusetts. In Pennsylvania, where the pest has been spreading for over six years, there has been significant yield loss in vineyards and the insect has become a public nuisance.