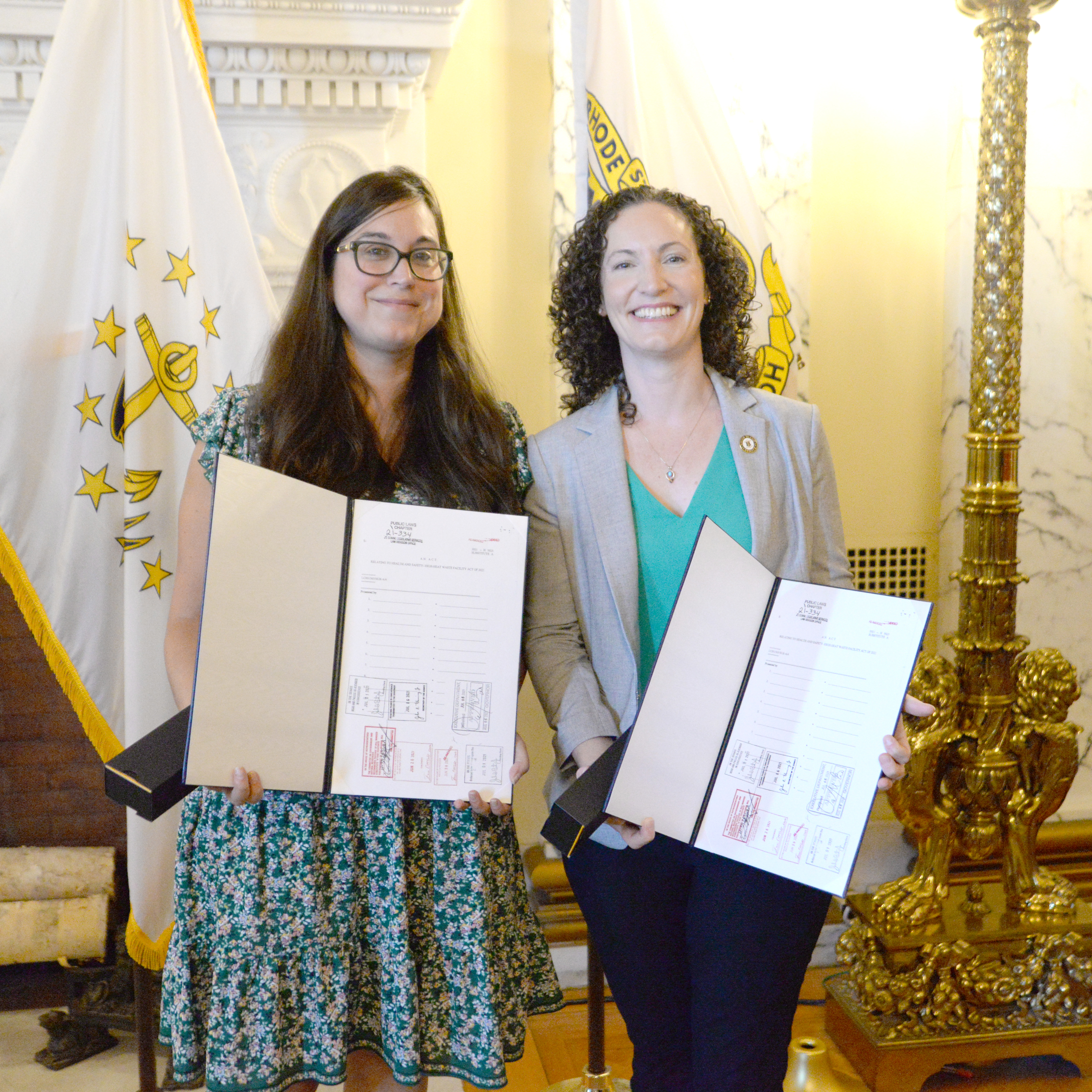 Rep. Justine A. Caldwell, left, and Sen. Bridget G. Valverde with the legislation after the governor signed it.

The law, which the General Assembly passed July 1, was cited by the Department of Environmental Management as among the reasons for its July 12 rejection of an application to build a facility on the West Warwick-East Greenwich border to burn medical waste at high temperatures through a process called pyrolysis. The facility would have been the only medical waste pyrolysis facility in the world, and the surrounding communities and environmentalists railed against its potential dangers.

The legislation (2021-H 5923Aaa, 2021-S 0527) prohibits the approval of licenses for any high-heat medical processing facility located within 2,000 feet of water, open space, parks, floodplains, flood hazard areas; or within one mile of pre-existing public or private schools, colleges, child care facilities, assisted living facilities, nursing facilities or areas zoned for residential use; or within any municipality designated in whole or in part as an environmental justice municipality.

“We and our communities are immensely relieved that this proposal has been rejected and will not be allowed in the future. We weren’t just saying, ‘Not in our backyard.’ This type of facility shouldn’t be in anyone’s backyard. Our community spent a lot of time and money litigating this issue and our neighbors were put through months of worry about the pollution and risks that might be coming their way. We don’t want other communities to have to go through the same thing,” said Senator Valverde (D-Dist. 35, North Kingstown, East Greenwich, South Kingstown, Narragansett.)

Said Representative Caldwell (D-Dist. 30, East Greenwich, West Greenwich), “This facility shouldn’t be allowed anywhere, but especially not anywhere near where people live, where children spend their days, or near our water or other environmental resources. Our legislation ensures that it isn’t, and that Rhode Island doesn’t become a destination for other people’s trash. Importing dangerous medical waste from out of state and burning it at high temperatures has obvious risks and it undermines our efforts to stop air pollution. No one should have to fight a proposal like this in 2021, and with this law, Rhode Islanders will not have to do it in the future, either.”