An updated Union Directory listing union goods and services in R.I. can be found on our website at www.RhodeIslandAFLCIO.org under the "Resources" tab.

Please use this directory to find where you can buy union and use services in Rhode Island.

North Providence- Rhode Island Council 94, American Federation of State, County, and Municipal Employees, AFL-CIO announced that the Bryant University Facilities Employees voted in a secret ballot election to join Council 94. The election was ordered and supervised by the National Labor Relations Board. The ballots were tabulated/results announced on February 7, 2022.

Derek Munschy, stated, "The Bryant Facilities Employees union, is comprised of maintenance, housekeepers, lock smiths, grounds workers, custodians, housekeepers, and truck drivers, whose hard work constitutes the backbone of Bryant University.  Our members wanted to join a strong, democratic union that will allow our voice to be heard more clearly in the workplace.  Council 94's assistance in negotiation, contract administration, and legal representation will make our union a stronger advocate to improve the quality of services and the wages/benefits of Facilities Employees at Bryant University."

John Burns, Senior Staff Representative for Council 94, stated, "We are very happy to work with the dedicated members of the Bryant University Facilities Union and thank our national union for assistance with this effort."

A big win for Local 328 members employed at Durham School Services! UFCW Local 328 joined representatives from the Rhode Island Department of Labor and Training on Monday, February 7th to distribute checks of unpaid Sunday and holiday time and a half pay to school bus drivers, monitors and aides employed at Durham School Services in Cumberland, Rhode Island.

When workers began organizing with our union, we learned that the company had not been adhering to state laws regarding premium pay on Sundays and holidays. We filed a complaint with the RI DLT to secure backpay for the workers. After an investigation, the DLT determined that the company should have been paying this benefit to employees and calculated the money owed. Yesterday, we joined the DLT to distribute that money back to workers. The amount of back pay totaled $26,515.39! Congratulations to the workers at Durham School Services on this victory!

Press Conference held on Tuesday with SEIU, Local 32BJ to highlight a new bill to protect our janitors and security staff! 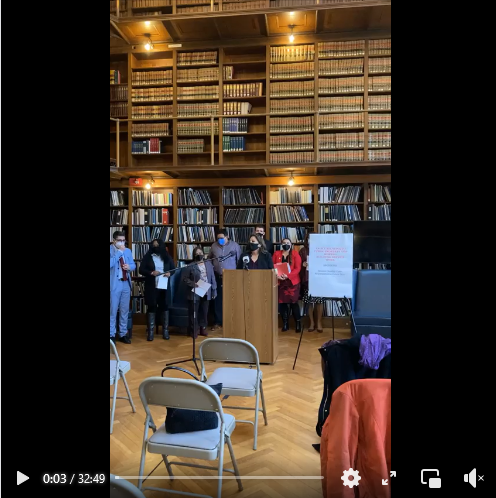 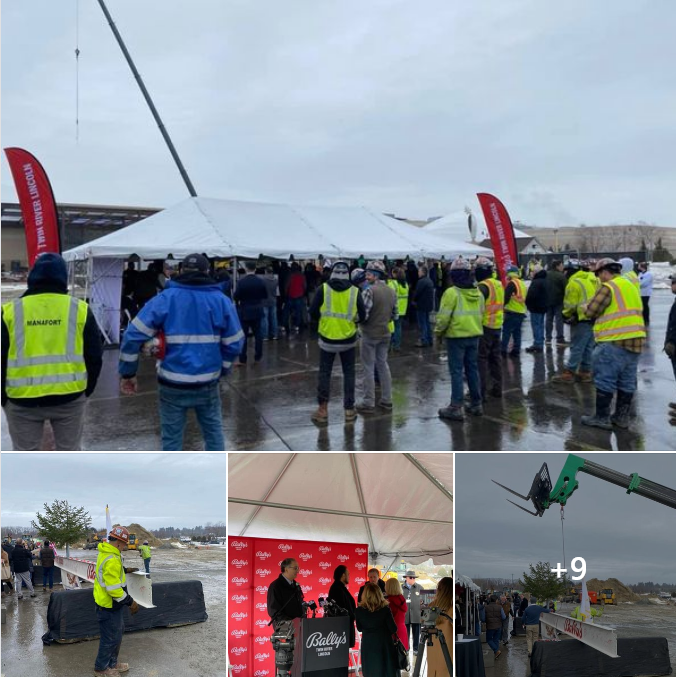 The Boston Globe: Labor and environmental coalition calls for R.I. to transition to a clean energy economy

And the state could address all three crises at once by transitioning to a clean energy economy, according to the report, which calls for creating 1,300 megawatts of offshore wind energy, “decarbonizing” all K-12 schools by 2030, building 35,000 affordable “net zero” housing units by 2035, and modernizing the state’s electrical grid, among other things.

To pay for those big-ticket projects, the report suggests tapping a variety of federal funds, including the federal infrastructure bill, and it lays out a range of tax proposals, including a gas tax increase or a potential tax on the amount of carbon released into the atmosphere.

The Biden–Harris administration delivered another victory for working people today with the release of the first report from the White House Task Force on Worker Organizing and Empowerment. This unprecedented report recognizes the critical role that unions play in creating a fairer economy. By taking steps to give more workers the right to organize and bargain collectively, the administration is once again demonstrating that it is committed to using its power to support unions.

Now, Congress must do its part. In order to fully empower workers, it is time to pass both the Protecting the Right to Organize Act and the Public Service Freedom to Negotiate Act, which will ensure that every worker who wants to join a union may freely do so. We are committed to working with the administration to implement these recommendations, and we look forward to the task force’s next report in six months. 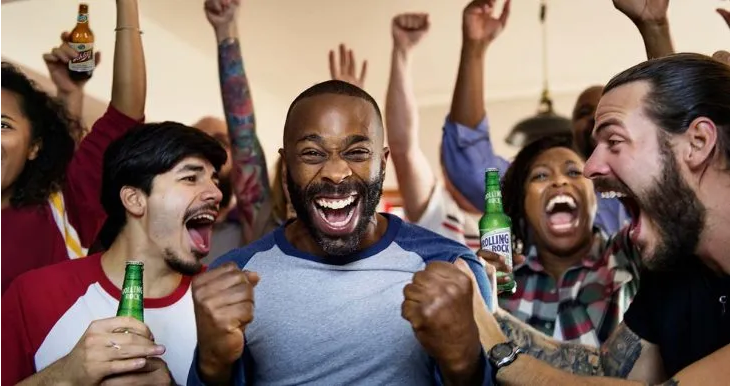 Ponder, for a moment, how much money will be spent on or around Super Bowl LVI on Sunday, February 13. We’re not just talking about tickets to the big game itself should you be lucky (or wealthy) enough to score a seat. Think about the TV ad revenue and the economic boost to the tourism around the host city, in this case L.A. Consider the bars and restaurants that will get a bump from watch events and the countless parties in homes across America. Chances are, you’ll be spending on the Super Bowl, yourself. Consider the food and drinks that you will bring into your own house for your party. Even with supply chain issues, the discerning shopper has choices when s/he peruses the supermarket aisles. For sport’s biggest day, we recommend the brews and bites listed below which are made by ethical companies who treat their workers fairly and give them a voice on the job. A great game is always that much more enjoyable when combined with ethical edibles.

So, whether you’ve got the Rams or the Bengals, enjoy the game, shop smart, stay safe and let’s all help build a stronger America.

**Remember to purchase your food and beverages from Stop & Shop, Shaws and Eastside Marketplace where our union brothers and sisters work. 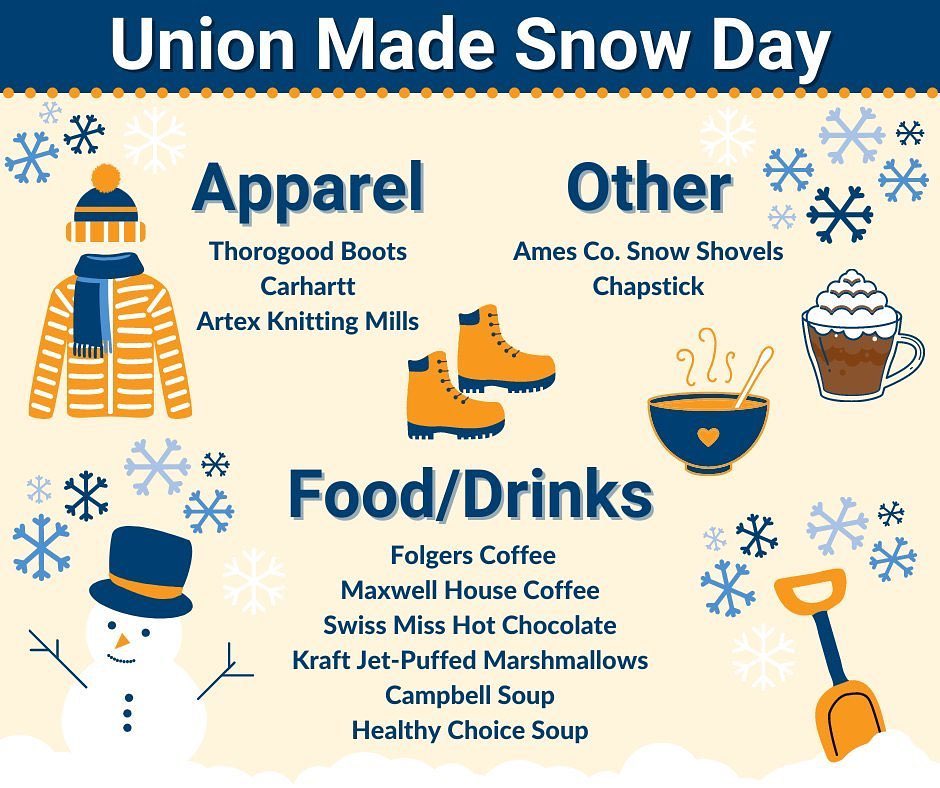 Please visit the picket line and show Johnson Brothers that workers stick together and will not be treated like second-class citizens.

Picket lines are at:

Let Johnson Brothers know about your concerns at:

Are you following us on Social Media? Click on the links below.

Visit our website for more information, news and events. 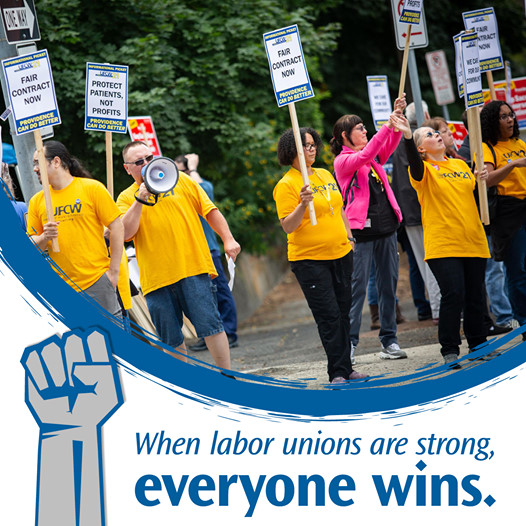 If you want a voice on the job or to build a better workplace, click the here to start organizing and taking action. 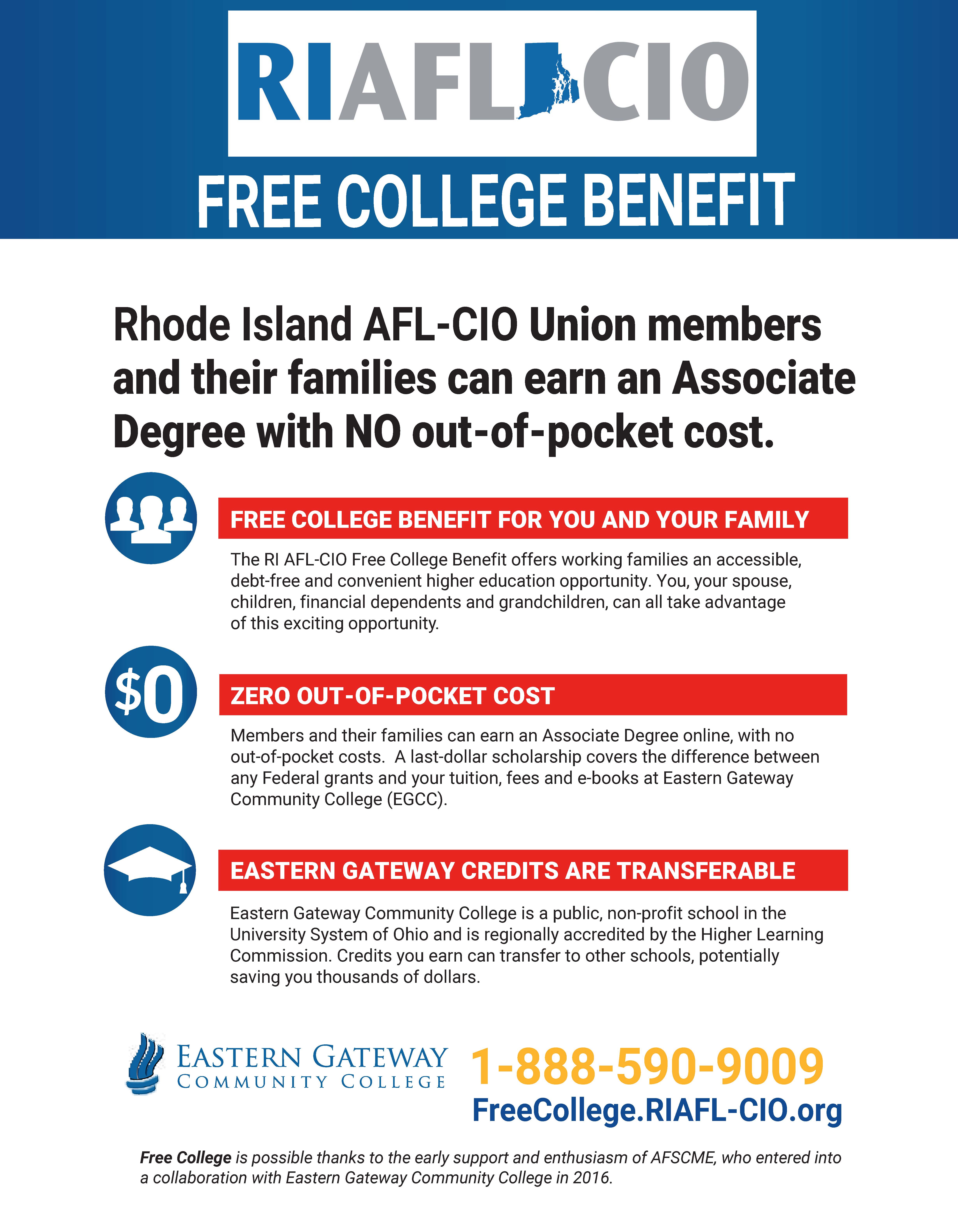 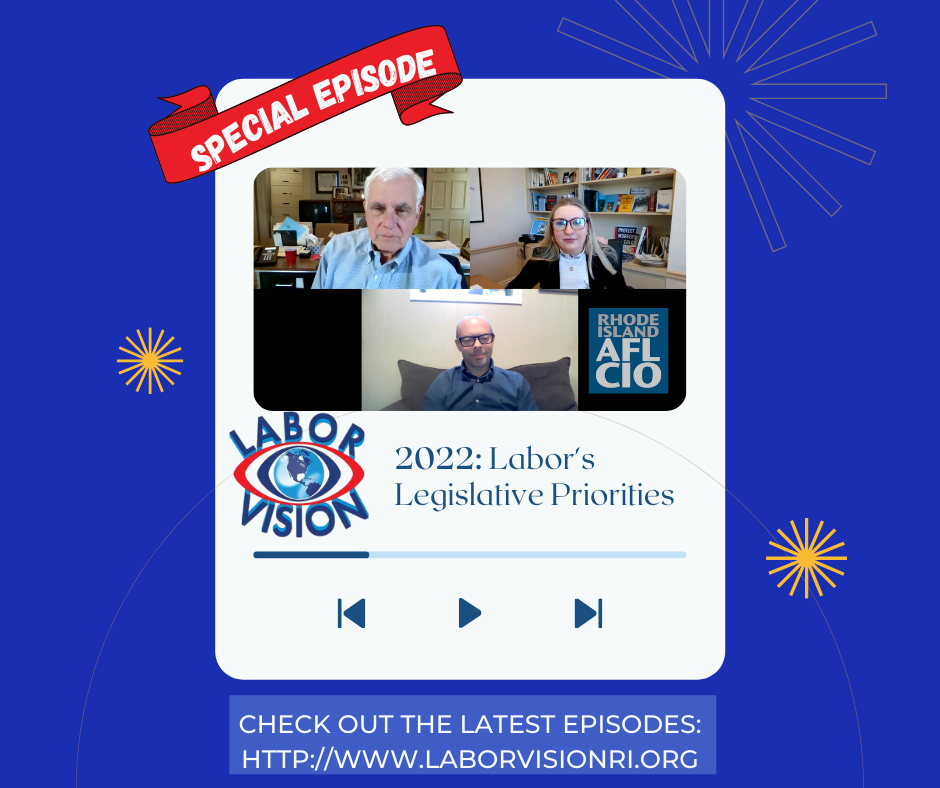 Coming up on Labor Vision …

The past year has seen many victories, including workers winning the $15 minimum wage, the passage of the Nursing Home Staffing and Quality Care Act, legislation protecting workers in the school bus industry,  an increase of Temporary Caregivers Insurance to 5 weeks, and the Act on Climate.

This year brings more goals to build on last year’s success. Some of the priorities include:

~ Moratorium on funding for charter schools and mayoral academies

~ Extend TCI to 6 weeks and beyond, as well as increasing dependency benefits

~ Make sure domestic workers get covered under minimum wage

(You can watch our full episode on this campaign here: https://youtu.be/FoGt4apIIaw)

~ Provisions for a Just Transition to a Green Economy